When I started making copper headgear I only dreamed of making a copper boiler, and I never contemplated building one of the size of Phat Phil.  It is therefore with great joy and pride that I announce the arrival of my newest product, and biggest to boot! Phat Phil is another product bourne at the insistence of a customer, maybe because they believed in me or maybe they couldn’t find one anywhere in Australia, but I am thankful for being pushed over the edge of the cliff and finding I have wings. 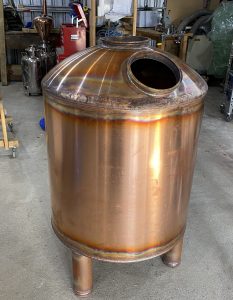 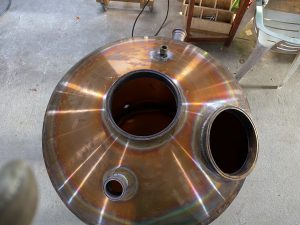 Phat Phil has 2 x 8 inch openings, a pouring port and a thermowell

I started with only copper headgear because I wanted a copper column for myself and as things got out of hand I ended up making them for sale.  I tried my hand at making a 100L boiler and it was sold within a week.  I upped that to 120L to make the most of a sheet of copper for little extra cost, and I was happy with the size.  Until a customer wanted different proportions, and so I built a 175L boiler, which soon turned into a 200L boiler which I call Tony Two Hundred after the customer who insisted I go bigger.  And 200L became the norm and remained the norm for a year, until last week. 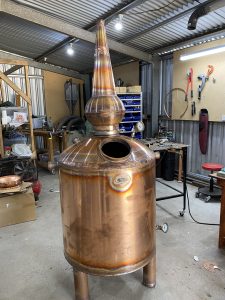 Phat Phil only became possible as a result of some new 8″ fittings I had fabricated out of copper.  Copper is a tricky material, beautiful but soft, and softer after heating. It distorts, shrinks and generally misbehaves while being welded or brazed and the fittings arrived as ellipses, no circles.  However, copper can also be put back into shape quite easily because of the properties which make it hard to work with.  So Phat Phil has been constructed with good proportions, an 8″ column port and an 8″ access-cum-sightglass.  As is standard with all my boilers, there is a 2″ pouring/pumping port on the dome and two thermowells, one on the dome and one in the liquid section.

Of onion balls and swan necks

With Phat Phil taking good shape there was a nagging thought that he ought to have a ‘real’ column that looks like the traditional stills of Scotland, and so another journey started.  Rather sternly I spoke with my sheet roller which is not designed to roll cones and between us we pushed and shoved, wedged and restricted, and out popped a cone.  Not quite like that as there is always a measure or persuasion required after rolling but the copper gets work-hardened and actually welds easier.

So me hearties, I am ready to shape, roll and weld another 330L still for those who can handle one.  But please, please, beware; Phat Phil takes over your distillery at night and does his own thing.  He’s an individual and won’t be tied down. 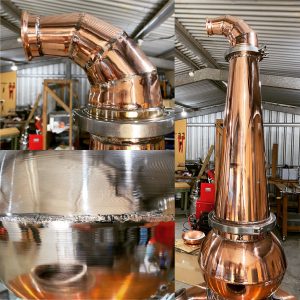 Chester, our copper still boiler, has gone from being a few pieces of 1.2mm thick…

Well, well, it has been a week of introductions and HHH Distill has another offering,…